We have identified 15 specialty pharmacies on the 2017 list, which is based upon revenue growth from 2013 to 2016. Annual revenues range from $6.4 million to $1.3 billion.The pharmacies and key stats are listed below. For the nine companies returning from last year’s list, median revenues in 2016 sped ahead by 24%—impressive but slightly slower than last year’s figure.

The specialty industry’s growth is creating a set of large independent specialty pharmacies. Will they keep racing ahead or wipe out?

Here are links to our previous analyses of earlier lists:
FAST 15

The Inc. 5000 “health” category includes hundreds of companies. Based upon the magazine’s company descriptions, we identified 15 firms whose primary business is the dispensing of specialty pharmaceuticals. 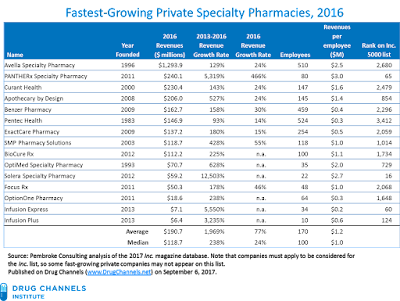 The chart above updates Exhibit 46 (on page 64) of our 2017 Economic Report on U.S. Pharmacies and Pharmacy Benefit Managers.

For our list of the largest specialty pharmacies, see The Top 15 Specialty Pharmacies of 2016. PBM-owned and insurer-owned central-fill mail pharmacies with substantial specialty operations constitute six of the of the industry's largest 15 specialty pharmacies. Only one company from that list—Avella—made it into our 2016 winner’s circle.

Here are my key takeaways from the 2017 list:
1) Revenue growth remains high for some companies, but others experienced a slowdown.

Although the Inc. list is a self-selected sample, the revenue growth rates are truly astounding. Average (median) 2016 revenue for these 12 businesses was $191 million ($119 million), and the average 3-year revenue growth rate was 1,969% (238%). The summary stats are skewed upward by the very high growth rates of the smaller companies.

Our 2017 list shows a healthy group of mid-size specialty pharmacies. Eight of the companies on the 2017 list had annual revenues of $100 million to $250 million. They are all attractive platform acquisition candidates for financial buyers. Consider Apothecary by Design, which was acquired in 2015 by BelHealth Investment Partners.

We estimate that Independent pharmacies accounted for about 10% of total U.S. specialty dispensing revenues in 2016. These businesses usually differentiate themselves from the largest PBM and payer owned specialty pharmacies by:

Note that the newcomers are very young companies. Six new specialty pharmacies joined the Inc. list in 2017. Five of these six companies were founded between 2011 and 2013. Their youth makes it easier for them to post sky-high growth rates.

3) Three pharmacies from last year have dropped off the Inc. list.  Diplomat Pharmacy acquired two companies from our 2016 list:
For a list of other transactions in 2016, see Specialty Pharmacy M&A: Our Look at 2016’s Deals.

Revenues at BioPlus Pharmacy—one of the top 15 specialty pharmacies—did not increase in 2016, so it did not appear on the 2017 list. The company told me that the slowdown was a strategic choice. For 2016, BioPlus started limiting its participation in Medicare Part D plans that levy very high Direct and Indirect Remuneration (DIR) fees.

The specialty pharmacy market is growing up. The larger companies no longer live life a quarter mile at a time. Tune in next year for the fate of the furious.

A perfect storm is brewing as specialty drug prices reach...